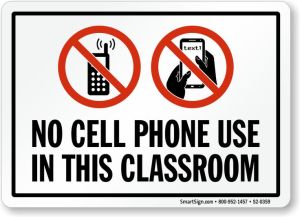 An increasing number of cities, states and entire nations are banning student use of cell phones at school, with Israel being the most recent addition to the list.

On November 6, 2019, the Israeli Ministry of Education announced a ban on cell phone use in the nation’s elementary schools. Students will be required to leave their phones in their bags in class and during breaks.

In September 2019, the Canadian province of Ontario implemented a cell phone ban in classrooms province-wide.

In June 2019, the Australian state of Victoria announced a ban on cell phones in classrooms for both primary and secondary students. The ban takes effect in early 2020. “Students will be required to switch off their phones and store them securely in lockers from the start of the school day until the final bell. When emergencies occur, parents or guardians can reach their child by calling the school,” the statement from the government of Victoria said.

Also in 2018, France banned school use of smartphones and other internet-connected devices such as tablets nationwide for all students between 3 and 15 years old. An earlier French law in 2010 had already banned the use of smartphones during all teaching activity, making France an early leader in recognizing the problem of cell phone use in schools. Additionally, France banned Wi-Fi in all nursery schools in 2015 in a law that also requires Wi-Fi to be turned off in elementary schools unless it is in use for teaching.

Beyond these cases of national and state lawmaking against school use of cell phones, a growing numbers of individual schools, school districts and teachers worldwide are establishing a “no cell phone” rule in the classroom. In most cases, the reason given for these bans is to curb student distraction and cyber-bullying, and to increase student focus and academic performance.

Like Loading...
re·fu·gi·um—An area that has escaped changes occurring elsewhere, thereby providing suitable habitat in which organisms can survive through a period of unfavorable conditions. [from Latin refugium, from refugere to flee away, from re- + fugere to escape]