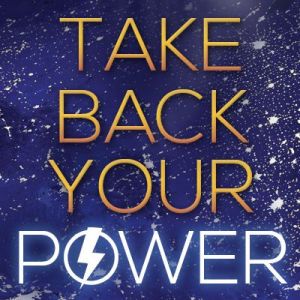 Three Vancouver Island screenings of the phenomenal new documentary film about smart meters, Take Back Your Power, are coming up next month:

DVDs of the film will be available for purchase for $20 at each of these screenings.

I recently had the opportunity to view Take Back Your Power. It is a chilling but essential look at the true risks and consequences of wireless “smart meters” that measure household electrical consumption—devices that have been forcibly installed on homes and business across BC and beyond.

Produced and directed by Vancouver filmmaker Josh del Sol, this 90-minute film is fast-paced, smartly edited and truly riveting. It goes well beyond the conventional (if snoozy) cinematic terrain of “talking heads.”

Del Sol travels the continent and even the globe in search of the ominous truth about the worldwide push for smart meters and the global smart grid they are creating. And what he finds in the wake of smart meter installation are soaring hydro bills, house fires, violations of privacy and property, civil liberty infractions, and even national security threats arising from the supreme hackability of a ‘smarted’ national infrastructure.

The film concludes with copious evidence of the profound health risks associated with pulsed wireless radiation, which these meters are constantly emitting.

It is hard to imagine how any impartial person (that is, anyone not under the spell of industry or misguided faux-green thinking) could view this film and not instantly want to go home and rip their wireless smart meter off the side of their home and replace it with an “old-fashioned” and safe analogue meter—or, failing that, go off-grid altogether.

And on the web: http://www.takebackyourpower.net 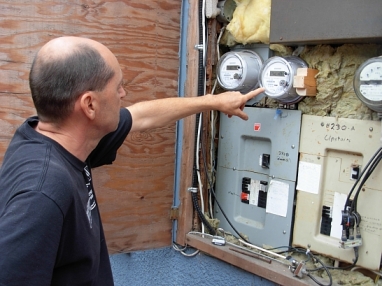 Jurgen Goering has one more smart meter today than he had yesterday – and not by choice. (Photo © Kim Goldberg)

NANAIMO, BC—One month after BC Energy Minister Bill Bennett announced that smart meters are no longer mandatory for citizens who do not want one, a Nanaimo man had a smart meter forcibly installed, and his property vandalized in the process, by an individual who appears to have been a BC Hydro employee.

Jurgen Goering has one more smart meter on his home today than he did yesterday. And not by choice.

Jurgen shows me the plywood barricade he had placed over his three remaining analogue meters, with holes cut for meter-reading. BC Hydro broke the locks off the plywood to force a smart meter on him. (Photo © Kim Goldberg)

I visited Goering at his downtown Nanaimo home this afternoon. He told me that an unidentified man driving a BC Hydro van and wearing civilian clothes entered his backyard yesterday around 2:00 pm, broke through his padlocked plywood barricade guarding his three remaining analogue meters, and exchanged one of them for a wireless smart meter while Goering stood there telling him to leave.

“This really shakes my faith in the political system and in BC Hydro,” Goering told me.

“What [Energy Minister] Bill Bennett did when he announced the opt-out last month was to send a message that the war in the backyards is over. So why did this happen?” Goering asks.

Goering says he confronted the installer on the spot yesterday and told him he was trespassing.

“I also told him I was the homeowner and I was not granting permission,” says Goering.

BC Hydro ripped the woodscrews out of Jurgen Goering’s plywood barricade to get a smart meter on his Nanaimo home one month after BC Energy Minister Bill Bennett said no one would be forced to have a smart meter against their will. (Photo © Kim Goldberg)

The installer, who had already ripped out the woodscrews holding the padlock on the plywood barricade, continued installing the smart meter beside a posted sign forbidding it and then left, Goering told me.

Goering’s home has four hydro meters on it – one for each separate residence. And he owns the entire building. One of the four meters had been replaced with a smart meter a year earlier, when a tenant moved out and contacted BC Hydro to close the account. Goering was using plywood and padlocks to protect the other three analogue meters on his home from a similar fate.

Goering says he also phoned the police while the unauthorized installation was in progress. But the police told him to phone BC Hydro instead, leaving Goering dumbfounded.

“Someone’s invading the privacy of your home and premises, and you can’t get them off your land?” Goering asks.

Last month, on July 11, BC Energy Minister Bill Bennett announced that the province will now offer citizens alternatives to the once mandatory smart meter program.

Either someone forgot to inform BC Hydro of the Minister’s new policy, or else the government’s promise of an opt-out option for customers was never genuine to begin with. 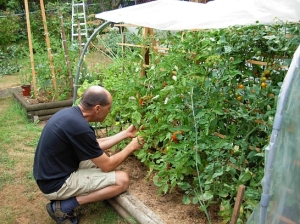 Jurgen Goering tends his tomatoes in his lush organic food garden in his backyard and mulls the Orwellian implications of BC Hydro’s forced installation of a smart meter on his home. (Photo © Kim Goldberg)

“It’s like living in George Orwell’s 1984,” says Goering. “It’s double-speak and double-think. They say one thing and do the opposite.”

Last month two BC organizations, Citizens for Safe Technology and Coalition to Stop Smart Meters, filed a class action lawsuit against BC Hydro to force the corporation to adopt a genuine opt-out option in which customers will be allowed to keep or revert to their analogue meters, and pay no additional costs for their choice.

More information about the lawsuit is here.

Kim Goldberg is an award-winning journalist and author in Nanaimo, BC. Her next book, REFUGIUM: Wi-Fi Exiles and the Coming Electroplague, is due out in 2014.

Like Loading...
re·fu·gi·um—An area that has escaped changes occurring elsewhere, thereby providing suitable habitat in which organisms can survive through a period of unfavorable conditions. [from Latin refugium, from refugere to flee away, from re- + fugere to escape]