In 1992, Victoria artist Dar Churcher was poised to expand her successful art career into the international arena when she was stricken with a mysterious ailment. Her worsening symptoms included fatigue, insomnia, extreme headaches, eye pain, and muscular weakness that at times caused her to collapse on the ground with paralyzed legs.

Thirteen years and many doctors later, Dar finally had a diagnosis: she had Lyme disease. Her doctor estimates she contracted it around 1988 and probably while hiking the woodsy trails of Metchosin, a rural area west of Victoria known by health authorities to be infested with Lyme-infected ticks.

“People with Lyme disease have compromised nervous systems,” Dar explains. “And mine is shot. I think we are all at risk for electrosensitivity. But those of us already sensitive to something else are the first to react. We are the canaries in the global coal mine.”

Lyme disease affects the central nervous system and can involve demyelination, not unlike multiple sclerosis in which neurons loose their insulating sheaths. Dar believes this loss of neural insulation leaves her nervous system much more sensitive to external EMF in the same way that improperly shielded wiring is subject to interference from outside signals.

In Dar’s case, exposure to wireless radiation in particular can instantly trigger a flare-up of her Lyme symptoms, causing her legs to buckle as she falls to the ground and is unable to get up or walk.

“Because of my hyper-electrosensitivity I loathe going inside any buildings,” Dar tells me as we sit chatting across her kitchen table in her basement suite at her mother’s home in Colwood.

“There are few people I know who actually collapse [when exposed to wireless radiation]. But that’s what happens to me,” she explains. “It has happened to me in the bank, the bakery, at the vet’s, the post office. I have had to crawl out of so many buildings I can’t count them all.”

Every wall and surface in her apartment is filled with her stunning sculptures from her once-thriving career as a sculptor and private art teacher. Her best-known work is her interactive installation piece “Just Imagine”, an enormous walk-in book that was exhibited years ago at the Art Gallery of Greater Victoria.

But that career is now permanently on hold—“sabotaged” Dar says by Lyme disease and electrosensitivity. 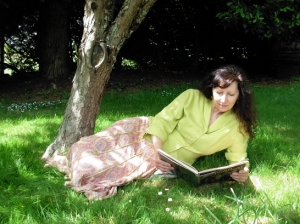 Dar now spends much of her time confined to a wheelchair. Yet she is able to walk short distances when out in nature, away from wireless radiation and other sources of EMF.

“When I distance myself from the built-up area of my home and drive into the country, I can, on good days, make it around a small park,” she says. “And when I am by the water—a beach, a lake—my muscles relax and I feel much better.”

For many electrosensitive people, their home is their only true sanctuary. But when electrosensitivity has left someone too impoverished to continue working, then ‘home’ is wherever that person is lucky enough to find affordable rent.

Dar’s basement apartment is located near two FM towers and one cell tower. And despite the semi-rural appearance of Colwood, there are more than 70 towers and cell masts within a 5-kilometer radius of her home, according to Industry Canada’s website.

“These radio emissions place a great stress on my body,” she tells me. “I desperately need to live in a location where electro-smog is non-existent so that my sleep will improve, my energy levels will increase and I can start to heal and recover my health.”

But Dar’s current rent of $400/month, paid for with her monthly disability cheque, makes moving unlikely. Besides which, she is also the caregiver for her 91-year-old mother who comes home on weekends.

“Even though my house is not my refuge, it’s the best I can do under the circumstances,” she explains with surprising cheerfulness.

Despite her 20-year ordeal, Dar has somehow managed to retain an optimistic outlook and a keen interest in the world around her. She asks me about my own book Red Zone, for which I wandered Nanaimo’s homeless community for three years, recording in poetry all that I witnessed.

“How did they respond to you?” she asks eagerly. “And what made you want to do the book?”

Her eyes sparkle as she takes me through the rooms of her home, describing with much enthusiasm the story behind every sculpture in her multi-year and unfinished “Transformations” project. Each sculpture captures a moment in a folktale of human transformation—a girl becomes a blue-eyed hare and then human again, an ardent suitor becomes a flower to be picked by his beloved, a snail becomes a man while bowed in prayer.

“My overall goal with this project has been to reflect common threads of human need, desire, goodness and virtue,” Dar explains. “These traits are found in every culture throughout the world. They help define and unite humanity. Without their expression, we would degenerate and devolve.”

As an artist, Dar is every bit as fascinated by the creative process of others as by her own. But due to her circumstance, she seldom goes out in public and rarely has visitors, so she has little opportunity for creative co-mingling.

“From my isolated cocoon, my computer is an umbilical cord to the outside world,” she explains. Yet even the computer is problematic because of its EMF and also her sensitivity to light. The blinds on every window in her basement suite are closed for the sunny afternoon of our visit on the summer solstice.

We move outside to take some photos in her patio garden and her lush, tree-lined backyard. But the ambient radiation from the neighbourhood is higher outside. And, combined with the sunlight and the stress of our prolonged conversation, it is all too much. By the time I take the last photo, her legs buckle and she must crawl on her hands and knees across her yard to reach her door.

I am dumbstruck by the swiftness of her demise. One moment she is standing, the next she’s on the ground, and the moment after that she’s crawling—as though all people get around this way.

Yet I also have to marvel at such determination and resiliency. And although I don’t quite have the words to put it all together, I know that somehow her passion for those folktales of transformation is also now fuelling her well-practiced and rhythmic crawl across the grass.

8 thoughts on “Dar Churcher – Colwood, BC”