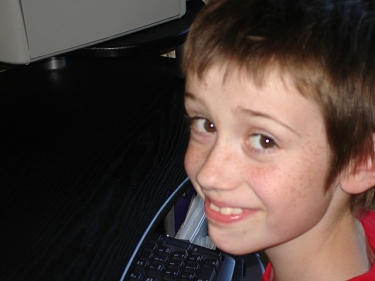 Eight-year-old Tyler Hoffmann has energy to burn. And his backyard trampoline, bike, basketball, and hockey stick each get a thorough workout on the afternoon I visit him at his grandmother’s home near Victoria, BC.

But in April 2012, a different story was unfolding. Tyler began coming home from Sangster Elementary School in the Sooke School District with extreme headaches and fatigue. And he was having trouble sleeping at night.

When asked to touch the part of his head that hurt, he would point to the top, his mother Lori recalls. But as the headaches grew worse over the next few weeks—to the point of nausea—Tyler was no longer able to touch the source of it, stating it was now in the middle of his head.

“After a few weeks of using Advil and Tylenol to alleviate the severe pain in Tyler’s head, we knew something was seriously wrong,” Lori says.

The following month, she discovered what it was.

“We accidently discovered, through another parent, that the school district had just finished installing commercial wi-fi networks throughout every school,” Lori explains. “This was done without informing parents. We were denied any opportunity for input,” she adds.

Tyler’s pediatrician recommended that the school shut off the wi-fi router closest to Tyler’s classroom, so that Tyler could remain in school and complete Grade 2 with his friends.

The school’s wi-fi routers, all active and transmitting day and night, were not being used at the time (and still aren’t) because there were no computers to connect them to. So the request from a doctor to turn off a single unused router seemed simple enough, Lori thought. The Sooke School District did not agree.

“The Assistant Superintendent told us that the router would not be turned off but would stay on 24/7 because they did not want to set a precedent,” Lori recalls. “I don’t have a cell phone, wireless router, cordless phone, wireless keyboard, wireless mouse or any other wireless devices in my home because I have made the choice of not exposing my children or myself to microwave radiation. The school district has now decided for me that Tyler will be exposed to it,” she says. 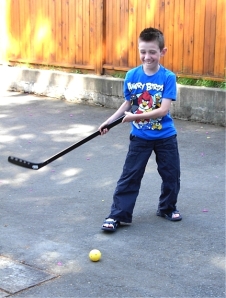 Tyler Hoffmann – back to normal once removed from his wi-fi’ed school. (Photo © Kim Goldberg)

Lori pulled Tyler out of school that same day rather than risk his health any further. And upon doing so, she was promptly informed by the school principal that Tyler’s teacher was under no obligation to give Tyler homework, marking, or evaluation so that he could complete Grade 2.

“After we removed Tyler from school, his headaches and associated nausea completely stopped,” says Lori.

In September 2012, his mother enrolled Tyler in an elementary school in the neighboring Victoria School District, where there would be no wi-fi router in his classroom.

Free from the toxic effects of commercial wi-fi in the classroom, Tyler performed at the top of his math and reading classes at his new school.

But transferring Tyler to an out-of-district school is, at best, a temporary solution, and does nothing to help the 8,500 other students in the Sooke School District. So Tyler’s family along with the Jeskes (another local family with electrosensitive children) have launched a legal challenge in an attempt to make Sooke School District classrooms safe for all children. Read their legal brief here.

The Hoffmann and Jeske families seek, at the very least, to bring the Sooke School District into compliance with the policies adopted in 2012 by the BC Confederation of Parent Advisory Councils, which call for a moratorium on installation of further wi-fi in BC schools plus a minimum of one school at each level in each district to be free of wi-fi to accommodate electrosensitive students.

“unlawful to experiment on children” 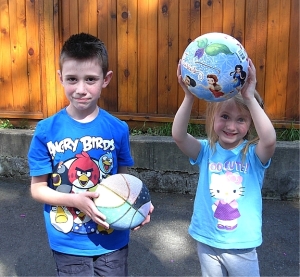 Tyler & his sister Julianna will both be attending schools in the Victoria School District to avoid wi-fi in classrooms. (Photo © Kim Goldberg)

“It is unethical and unlawful to experiment on children,” says Tyler’s grandmother Janis Hoffmann. “Wi-fi is an unregulated technology that has not been tested for safety for children in schools,” she adds. “Parents have not been informed of the risks and have never been asked to sign a consent form. Ironically, the student field trips are explained in great detail, requiring parents to sign a permission slip before children are permitted to attend.”

Tyler and his five-year-old sister Julianna will each attend school in the Victoria School District in September 2013 where they will not be exposed to wireless radiation from commercial wi-fi routers in their classrooms.

To donate to the legal fund for electrosensitive children sickened by wi-fi in schools, go here.

Text and images © Kim Goldberg 2013 (unless images are otherwise credited)

(Tyler Hoffmann’s story will be included in Kim Goldberg’s forthcoming book REFUGIUM: Wi-Fi Exiles and the Coming Electroplague, due out in 2014. Read more people’s stories here.)

15 thoughts on “Tyler Hoffmann – Colwood, BC”